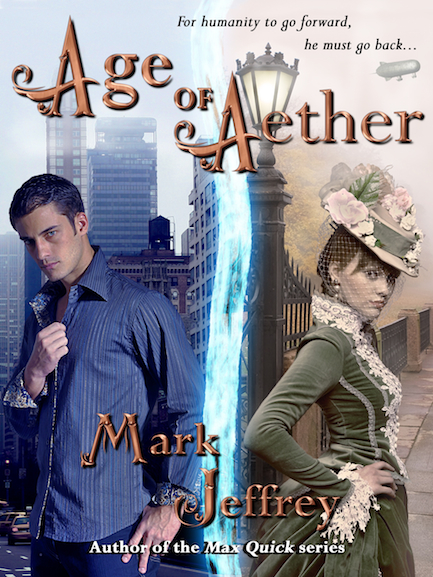 AGE OF AETHER, by Mark Jeffrey

When Captain Benjamin Bantam is tapped to go back in time in order to retrieve a cure for the vicious Shadow plague, he is shocked to arrive in an alternate 1944 where electricity doesn’t exist. Instead, a parallel past has mysteriously arisen — complete with parasols, stunningly luxurious Aerotels, hydrologic computing, Helux-powered ‘cloud growlers’ and a space elevator-based moon race with Germany. And of course, there is the lovely Dr. Rachelle Archenstone …

But when Hitler is made Chancellor in this world and the American space program sabotaged, Bantam is the only one who realizes the true depth of the danger posed by the newly-formed Nazi party. Together with Rachelle, he races to save this America while seeking an explanation to the mystery of this alternate past — and with it, a way to return to his own world with the Shadow’s cure. But when it comes down to a choice between his lovely Rachelle and a thousand years of Nazi rule, what will he do?

Thrill to a tale of a Yesterday that never was … And yet was!” (via the description on Amazon.com)

So this project came at me out of the blue. Being involved in the podcasting community, I’m aware of the success Mr. Jeffrey has had regarding the first Max Quick book, which went from podcast audiobook to published by Harper Collins. We podiobookers always sit up and pay attention when one of us is recognized for our skills and talents.

When Mark approached me with this project, its purpose was not that of a typical book. There were other things he wanted to do with this cover, only one of which would be releasing it in ebook format. I was quite pleased when he told me that after seeing my cover for Antigone’s Wrath, he knew I would be the right person for this job. I’m very happy to report that his instincts served him well. Mr. Jeffrey was very pleased when I presented him with the finished image.

I gotta say, I am too. This cover took a pretty good chunk of time, but because of where it was going to be seen at the time I took the job, there was extra pressure to make this the best of the best of the best in my portfolio. What took the most time here was finding the right models amongst the hundreds and hundreds of faces over various stock photo sites. Three days were spent searching for the woman, two for the man. Not only were physical traits a concern, but costume and pose were factors as well. This is where cover design gets tricky when you don’t have an arsenal of high-paid models, photographers, locations, and wardrobe at your disposal. It’s sometimes difficult to make a client understand that the character in their book does not have a real world analog (or one they can afford if they do). I won’t be able to find the exact person they picture in their head at a cost they can pay. Flexibility is absolutely crucial on the client’s part. Yes, we can find approximations, but unless you are hiring an illustrator be ready to compromise a little. Mr. Jeffrey was very good about understanding the limitations that my kind of cover design comes with and worked with me at every step to find the best solution for the image. Because of this open communication, the end product turned out fantastically well. This is easily my favorite project to date (and not just because it’s Steampunk!), and hopefully it shows in this beautiful cover.