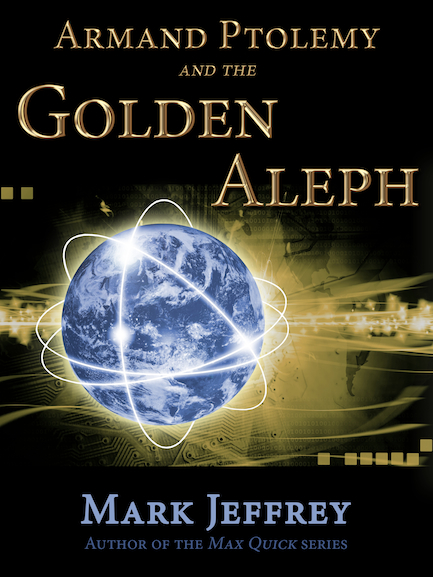 ARMAND PTOLEMY AND THE GOLDEN ALEPH, by Mark Jeffrey

This is the world of ARMAND PTOLEMY, a new action-adventure hero. Facing an enemy armed with the Golden Aleph — a mystical device that allows its wielder to see holographically into every point in time and space, Ptolemy must use every trick of his Oxford-educated mind and circus-trained body to succeed.

But how do you fight an enemy that knows your every move … even before you do?

When Armand Ptolemy is called to investigate strange tremors plaguing an old wing of the New York public library, he finds himself enmeshed in a series of events that began in 1912. Yet Ptolemy himself is rumored to be from the past — and the world’s Elite lust after the secret of how he seemingly jumped forward over one hundred years in time. Most keenly interested in this secret is Octavio Veerspike, head of the Veerspike banking dynasty.

When the Commission — a secret society of the world’s most powerful people — suddenly call a conclave in the tropics, Ptolemy has to figure out what they’re up to, and fast.

But the Elites have other ideas. Putting into a motion the capstone of a hundred-years old plan, the Commission wants Ptolemy out of the way. And with the Golden Aleph giving them very potent powers of prediction, they just may succeed …” (via the book on Amazon.com)

So, I’m not gonna lie. This wasn’t my first version of this cover. Or my second. Let’s just say it wasn’t working and I started over twice and leave it at that, k? Guess I was having an off day. :P

This cover is a commissioned redesign. I went with the standard “black bar sandwich” that’s pretty recognizable in the mystery/thriller/suspense genre. The imagery had to hint at both technology and  the desire of a few to create a new world order. The colors are highly complimentary of both the title and subject matter so the whole thing pulled together pretty well… you know, once I stopped trying to reinvent the wheel.

This is my first cover using my brand spanking new version of Photoshop CS6. I swear I heard a heavenly choir singing when I opened the box it came in…