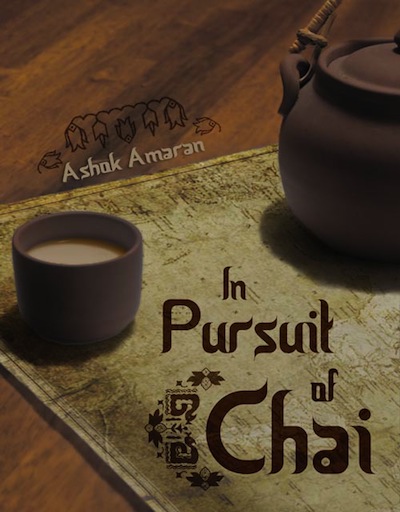 In Pursuit of Chai, by Ashok Amaran

This was one of the projects I completed as part of my last semester in school. This particular book was still in the process of being written, so I was designing based off of a rough idea presented to me by the author. The cover needed to show how this journey takes the main character through many ancient places including the Aztec, Incan, Mayan ruins, across the Atlantic, through the middle east, to Jordan, Israel, Egypt, and finally further east to India where he meets with Yogis that hold the secret of the popular drink. Eventually, what he finds will change him and the way he sees the world forever.

The idea was sort of Indiana Jones meets Three Cups of Tea (if you’re familiar with that cover art), and I think it really looks quite nice.

This photograph was taken by me, with additional imaging and typography done in Adobe Photoshop CS4. 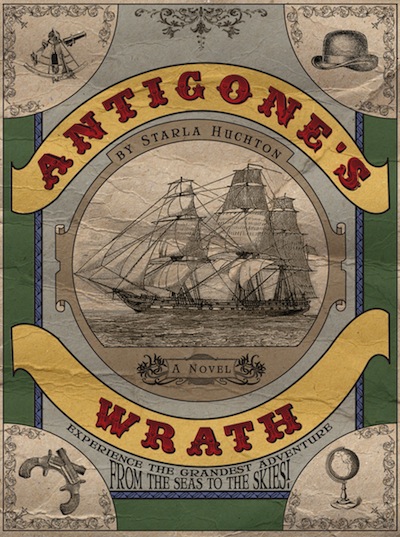 “Captain Rachel Sterling commands the ship that rules the sea and air, but when a chance encounter ends with a strange ring in her possession and a secretive order known only as The Brotherhood out for her blood, gone are her simple days of dodging the law to make a profit. Armed with a loyal crew, an enamored inventor, and an intellect as deadly as her aim, she must fight against an ancient power and those who would command it. What is the purpose of this mysterious ring and what dangerous magic will she face? Join the crew of the Antigone’s Wrath as they sail the waters and navigate the skies to find the information they desperately need before it’s too late.”  (for an excerpt of this work, please see the post over on my other site starlahuchton.com) END_OF_DOCUMENT_TOKEN_TO_BE_REPLACED

A cover is the first interaction any potential reader will have with your book. Within the first five seconds, a reader will make a whole slew of inferences based on what they see before them. What genre is this book? Is it a lighthearted tale, or a serious one? How much effort has gone into this book? Was time taken to consider every part of production? Is the story intriguing?

These questions, and many others, will be answered with one look. That’s all you get. With the deluge of media out there, competing for a finite pool of consumers, their first look has to be one that leaves them wanting to know more. END_OF_DOCUMENT_TOKEN_TO_BE_REPLACED

If you’re not a designer or are new to the wonderful world of book covers, you might look at my Project Questionnaire and be a bit overwhelmed by this question:

“5. Image size requirements. Please include resolution (generally 300 dpi for print, 115 dpi minimumfor digital images) and height/width requirements. If you intend to print, please list which service(s) you will be using, as well as formatted manuscript page count to ensure correct spine width in the cover layout.”

Here, I will elaborate on the information you’ll need to provide to any designer you want to hire to create something. This will relate specifically to cover design, as this is one of the most important things your artist will need from you. END_OF_DOCUMENT_TOKEN_TO_BE_REPLACED

I want to tell you all a little about why what I do is such an important service.

As I’m also a writer, you might guess that I love telling stories. That is just as true for my design work. Even if it’s a simple business card, my ultimate goal is to create an image that gives a narrative about who or what the contents are. In a word, a story.

This is why I love designing book covers. It allows me the opportunity to give a potential reader a little glimpse into a larger tale. My best work comes when I speak to an author about their novel or short story and hear all the excitement they have about their work. One-on-one relationships with authors give me insights into the stories that a reader might not get. For example, in doing a recent cover, the author told me about the history of his novel’s setting that was not included in the manuscript. As a result of my knowing this, he said he was amazed at how well I captured the look and feel of the place he had only imagined. As an artist who physically renders words into pictures, this is the highest praise I could possibly receive. It gives me a sense of true accomplishment. It’s what I strive for in all my creations. END_OF_DOCUMENT_TOKEN_TO_BE_REPLACED

Thank you for your interest in Starla Huchton’s design services! My goal is to create a cover image that speaks to readers and communicates the essence of your story. The terms of my contracts are as follows (see Schedule A at the end for a broad overview):

ATTENTION – These terms of engagement become an express contract by PERFORMANCE of the potential CLIENT – you are engaging the services of SH, Productions, LLC by tendering your deposit. All terms and conditions as presented on this page are applicable at the moment of tender. END_OF_DOCUMENT_TOKEN_TO_BE_REPLACED