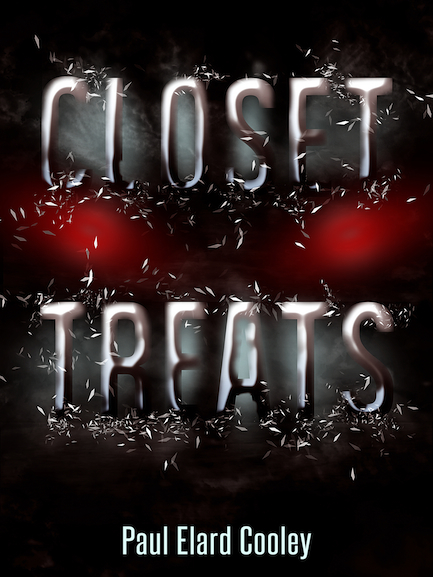 “What is the ice cream man?”

Reality is a slippery slope for Trey Leger. Despite his mental illness he’s managed to carve out a somewhat normal existence.  But when a strange ice cream truck starts making the rounds of his neighborhood, Trey can no longer tell reality from his delusions.

Part of the Fiends Collection and nominated for the 2011 Parsec Award Best Novel, Closet Treats is filled with disturbing imagery and monstrous dread.” (via Shadow Publications)

So, this cover is one of the first I’ve ever done that strictly focused on the typography rather than imagery. I love covers that can pull this off successfully.

This wasn’t actually my first idea for this particular cover, but my initial concept was a little more than I could pull off well, and more or less blew up in my face. But, I’ve always wanted to attempt a typographical cover and this seemed like a really good opportunity to do so.

There are all kinds of awesome tutorials on how to achieve different text effects, a lot of them applicable to the horror genre. In this case, I needed one that spoke to the shattering mind of a man haunted with psychotic delusions. Because I believe I’m in the business of not only making nice looking covers, but also educating people on what MAKES a good cover, if you want to see what I used (and altered for my own personal aesthetic) you can find it here. I promise I’m not a magician, I’ve just got mad google-fu. ;P

But the text wasn’t quite enough. There needed to be something that spoke to the evil visions the main character of the story experiences. The first thing I thought of using in the original idea was, obviously, the ice cream van from the story. Clearly that wasn’t going to work here so instead I opted to hint at the thing that hides inside said van. The glowing red eyes described in a passage Mr. Cooley wrote was the perfect subtle touch here.

This was a redesign, of which I will (apparently) be doing at least one more for one of his older works, along with another new project, both slated (I believe) for this year. Mr. Cooley always likes to throw a curve ball at me with his stories, so I’m looking forward to a whole mess of new challenges down the line.