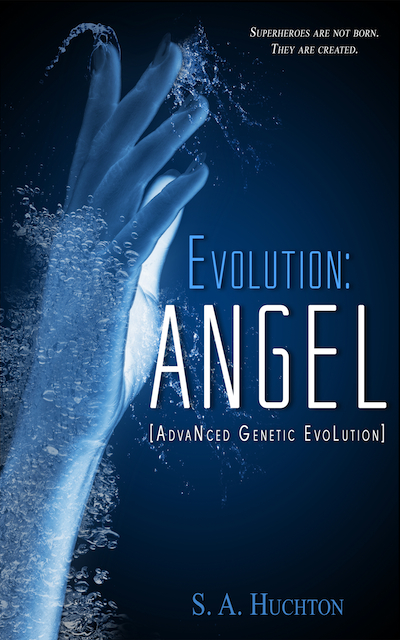 Evolution: ANGEL by S. A. Huchton

“Candace Bristol has always been obsessed with comic books, but in a world where the nightly news often mirrors these inked stories, her dreams of becoming a real superhero could actually come true. After being rescued by members of the government’s AdvaNced Genetic EvoLution (ANGEL) Project four years ago, getting recruited for this elite team is all she’s wanted.

Now 18, she’s finally reached her goal after years of study and physical training, but little could have prepared her for life as a genetic experiment. As though coming to terms with her new ability to manipulate water isn’t tough enough, she never expected to be swept off her feet by one of her fellow recruits.

With genetic alteration, the threat of physical and mental instability hangs over every superhero like a shadow. When one of their own tumbles over the edge of madness, Candace will have to choose between protecting the world, and saving the one who holds her heart.” (via Goodreads)

I am really excited about this one. This is the cover for the first in the new series of Superhero Romance novels I’ll be releasing this year! March 6th is the release date for this one, and books 2 and 3 will follow on its heels at two-month intervals!

I sometimes struggle with concept ideas for my covers, and this was one of those times. While it is a Romance, the story has a much wider appeal than that audience only. I wanted to come up with a design that reflected that, something that gave it the softness of an emotional story without plastering it with half-naked people almost kissing. That’s not what kind of book this is. A design like that would do the story a disservice.

What I came to was what you see above. It’s a hint at the other-worldly nature of what the characters become, with a specific focus on the main character. This concept also easily carried over to a series concept, which was pretty crucial as I knew going in that there were three books to this.

The execution was much higher on the difficulty scale for me, so I went in search of tutorials and tips on how to get the watery look for this hand. If you’re curious, this is the photo that I altered for the Evolution: ANGEL cover: 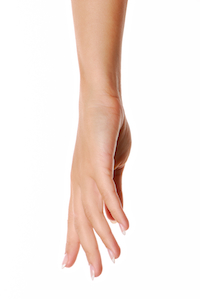 So how does the above hand turn into the one on this cover? Well, if you’re up for a challenge, and want to learn some new Photoshop skills, you can find a tutorial for this effect right here. Be warned, however, this one is time consuming and not for a first-time PS user. I did tweak that tutorial for my own purposes, so keep that in mind as well. Your results may vary.

I will say this about the other two books: they did not require nearly the work that book 1 did. But I think that’s generally the case with series books. Sometimes the hardest part is coming up with the idea. Once you’ve got that, the rest will usually fall into place.

You can read the prologue and view teasers and other extras for this book at starlahuchton.com.