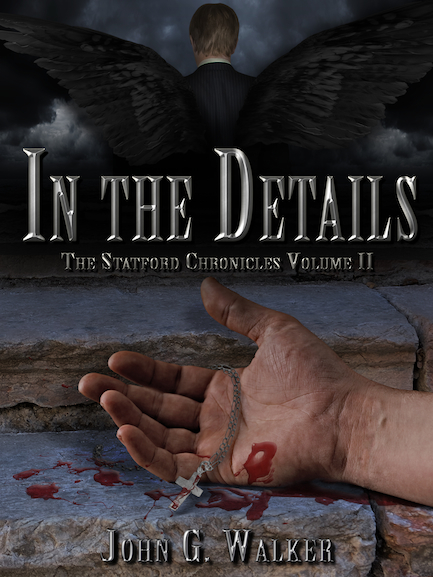 In the Details by John G. Walker

“Private detective Tom Statford has a problem. A priest has been murdered in Hampton Roads, Virginia. That’s bad. His killer is claiming the Devil as an accomplice, sending the forces of Heaven after the fallen angel. That’s even worse. Lucifer comes to Tom to proclaim his innocence, which makes Tom’s life more interesting than it needs to be, and he’s the only one who can prove the Devil didn’t make the killer do it.

But who would believe the Prince of Lies?” (via the description on Amazon.com)

I gotta say, I even impressed myself with this one. I think I’m getting the hang of this cover design thing! ;)

This is the second book in the Statford Chronicles series, not including the short story collection. In this one, Tom Statford must investigate the murder of a priest that’s being blamed on the Devil. Hence, the elements I chose for the cover.

Everything in the image is a composite, from the wings on the blond man, to the hand on the steps with the crucifix and blood. Each piece is an individual layer and required lots of adjustments to get the lighting to match to make it one cohesive image. Lots of added shadows and such too. The type is a carryover from the other two covers.

Not a whole lot to say about this one, really. I’m just very pleased at the finished results.