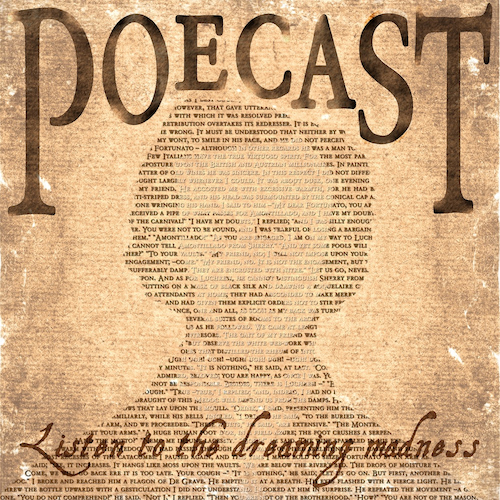 This is a new project by Paul K. Ellis in which he will be reading selections from the written work of Edgar Allen Poe. This probably doesn’t need further explanation as there aren’t many folks that can’t name at least one of his poems or short stories.

Mr. Ellis commissioned me for the album artwork for this new podcast, and I immediately knew where I wanted to take the design. It turned out almost exactly how I imagined, and I’m very pleased with the results.

I originally created the image in black and white, which could then be altered into any other colorings later. Using a picture of Poe, I maxed out the contrast several times, then used image filters to make it look more like the absolute color boundaries of vector images. When this was complete I made two layers of identical text, one in black, one in white. After this, I made a layer mask from the black areas of the Poe image and another from the white areas and applied them to the text layers. I then got rid of the original Poe image and was left with what you see above (only in black and white). For the coloring, it was a simple matter of adding an aged paper background and then setting the type layers in various blending modes after changing the text colors to hues of brown varying from dark to light.

That might sound really confusing if you know nothing about Photoshop-type software. Sorry. But for those of you who do, I hope you were able to follow all that. :)

If you examine Poe closely, you might recognize the text he’s made of. It’s from The Cask of Amontillado.

Check out the PoeCast (launching in October according to Mr. Ellis) here.