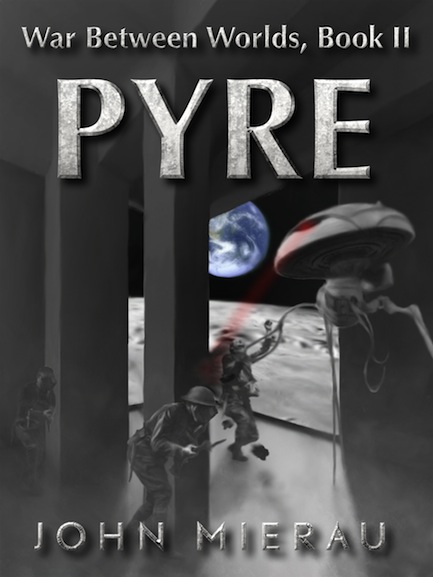 “1896. A Year after the Invasion from the stars. The world is rebuilding, after Invaders succumbed to a lowly virus. Now, brigands and pirates challenge nations on the strength of captured Invader technology, and Her Majesty’s Space Ship Victoria sail to the moon to put an end to the final Invader threat: the rocks being hurled down to Earth, spawning deadly winters and starvation.

Can the Victoria stop the bombardment? What will they find on the moon? Will the pirates hunting them in a ship of their own or spies aboard the Victoria destroy them before they complete their mission?” (via John Mierau.)

This is the second book in John Mierau’s War Between Worlds series, the first having been done by another artist, Adam Blakemore. The challenge here (aside from the typical finding-the-right-tech problems that go with sci-fi covers) was matching the style of the first cover, seen here: 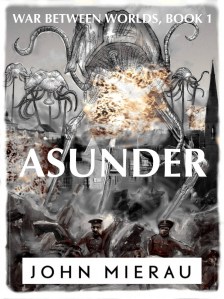 As you can tell, this was a hand-drawn illustration, which is something I don’t do personally, however much I wish I had that talent! So I strapped in, rolled up my sleeves, and spent a LOT of time with the smudge tool to simulate the blended charcoal look of ASUNDER. I have to give major props to Shannan Hinners (@gwenuvarr on Twitter) for digging up some amazing WWII imagery of soldiers in the field. This project needed a good touch of realism and the photos she sent were absolutely PERFECT.

As far as I know, there’s no official release date for this one, but I’ll update as this changes. Until then, you can check out the free podcast audiobook of book one, ASUNDER.