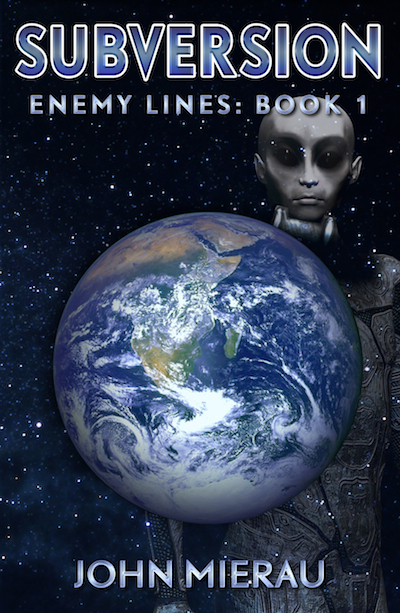 “2021: Typhon Systemwide has technologically advanced far beyond all other powers. They mine asteroids and dominate world markets thanks to knowledge gleaned from the wreckage of visitors to our world… wreckage stolen from the US Government.

Now Typhon will challenge a mysterious US agency, Division 10, for control of all captured ‘Flyer’ technology. Too late, they will discover there’s another player in this game, and the stakes are far higher than corporate global domination.

A relentless Division 10 agent, a lady thief, and a man newly returned to Earth must evade Typhon’s mercenary army long enough to hunt down the real threat: alien invasion.” (from the back cover)

This is the first in a series of four covers for the novella series ENEMY LINES. This was originally a podcast audiobook series, which John Mierau set up a Kickstarter for to raise funds for professional editing and cover design. Due to the failures of another artist to deliver, John turned to me to save the day at the last second (as in the day before I put new job requests on hold, lol). He came to me with a concept already in mind, so all I needed to do was make it work (that’s all? @_@ ). Which, I hope, I’ve done. Each of the covers features similar elements to this first one with modifications to text color to best compliment the imagery. This first one will be available in print, which will look like this: 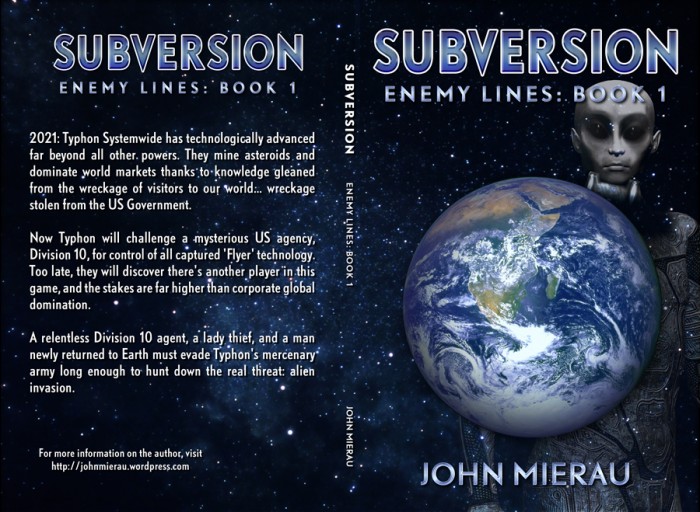 The most difficult part of Science Fiction covers is always depicting the tech and non-human species correctly, if for no other reason than they simply don’t exist to photograph them. Fortunately, there are many talented 3-D artists out there that make their fantastic creations available to the rest of us. Even so, this grey guy took a bit of tweaking on my part to capture the author’s intention properly. My favorite part of this series has to be the planet in the center. I love the way it almost pops off the rest of the page. Hopefully the printed version translates this effect well.

I’m not at liberty to reveal the others just yet, but rest assured you will see them soon.