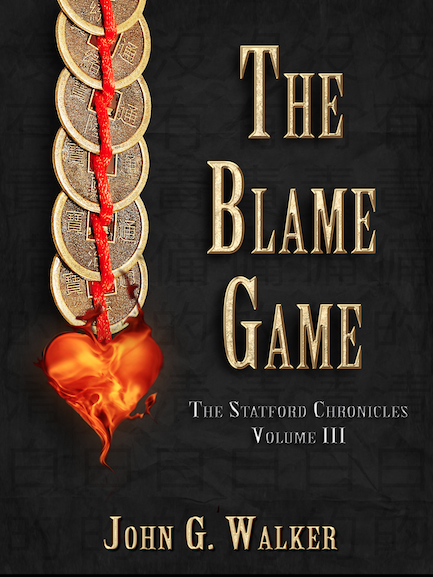 Revenge may be a dish best served cold, but that isn’t stopping someone from using a god of fire to assassinate the heads of a Chinese crime family, the people marked with ancient gold coins before having their hearts crushed. One of the last targets comes to private detective Tom Statford for help. That’s all well and good until he finds his client dead, and the last target has no idea what’s coming her way. Time is running out, and Tom has to find her before it’s too late.

But what can he do against a mortal able to control a god?” (back cover blurb provided by the author)

This one is a simpler image than the last one I did for this series, In The Details. I find the more I work with a series, the easier the elements come together. Font: already decided. Text placement: straightforward. Mr. Walker had already come up with some killer image element ideas so I took them and ran. I was actually surprised at how nicely the coins came out on this one. Almost like I meant to do that! LOL

I did struggle a little with the background on this one. After chatting with the author about some of the subtler elements of the story, I decided to run with “no blame for the blameless” in Chinese characters (vertically, of course), repeating over crumpled paper. This background image continues on the back for the print cover as well, so there wasn’t much left to do. I love nailing a cover in one shot. It’s one of the best feelings ever!

Not sure on the release date for this one, but I’ll update as soon as this book becomes available.