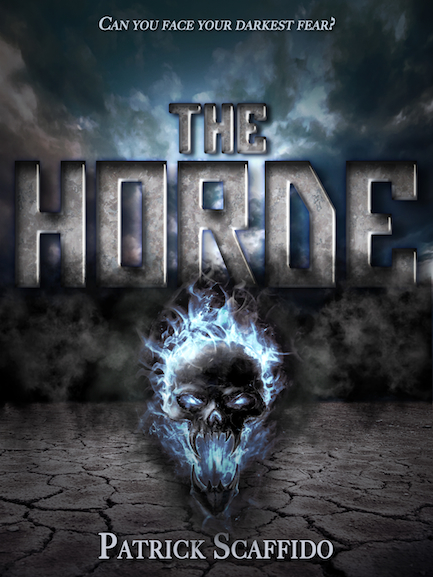 The Horde, by Patrick Scaffido

I’d give you blurb for this one, but I’ve also been contracted to write that and it has yet to be finalized. If you’d like more information on this story, view the F.A.Q. You on Patrick’s website.

So how’s this image for EPIC? Hello, flaming skull!

The Horde was kind of an undefined ball of weirdness when I was first approached with it. One of the most complex parts of designing this bad boy was trying to pin down the feel and genre of the story, believe it or not. It was one of those “it’s dark urban/epic fantasy with horror elements and a side of science fiction. And some funny too”. At which point I told Patrick to back WAY up. You try to put all of that on one cover and you’ll end up with a mess that confuses everyone. Ultimately, we ran with dark urban fantasy, as that really made the most sense here.

After reading through the info he provided on the story, I started whittling it away to what I thought the most important elements were. We went back and forth about whether or not to include depictions of the characters on the cover, but it eventually came down to resources. If I had a stable full of models and several walk-in closets full of costumes and props, maybe that would have been an option. I think maybe Big 5/6 design houses have those kinds of resources for the biggest name authors out there, but that’s neither me nor Patrick at this point (as much as we’d like to believe otherwise). As such, we had to come at this from a different angle. There would be no epic sword battles this day, alas.

But we did decide on the landscape first. The worlds invaded by The Horde are left lifeless husks in its wake, so this was an easy decision. I got lucky in that this shot also had a nicely dramatic sky with this fantastic bright spot near the center. This spot actually became one of the things about the cover people really liked a lot, as it gave a sense of hope in the encroaching darkness and evil. I painted in the black, foggy mass approaching on the horizon and found a font that looked really great with a distressed metal effect, which I positioned to look like it was either rising from or in the process of being engulfed by the dark miasma. But something was still missing. It needed something central to lend more depth and dimension to the overall image.

So I sat down and had a think. Since the Horde can be anything that comes from nightmares and essentially brings death, what could I use to represent that? It came down to figuring out a universal symbol that causes every human since humans existed to come face to face with their own mortality. Nothing speaks to this more than a human skull. Skulls are death, plain and simple. However, this needed to be a bit more than plain and simple. Death, yes, but also EPIC.

And thus, like any creative would do, I set it on fire.

The result is what you see here, and I’m pretty darned pleased with it. There’s more to what went into this design than what I’ve talked about here, but that’s it in a nutshell. At Balticon this year, Patrick and I held a panel in which we discussed this process of designing a cover from start to finish, and as soon as Patrick’s posted the audio I’ll be linking to that here. It was an interesting conversation, and shows a bit of the weirdness of the relationship I have with Patrick. It’s… well, weird is really the best way to describe it. Kinda like this book. ;)