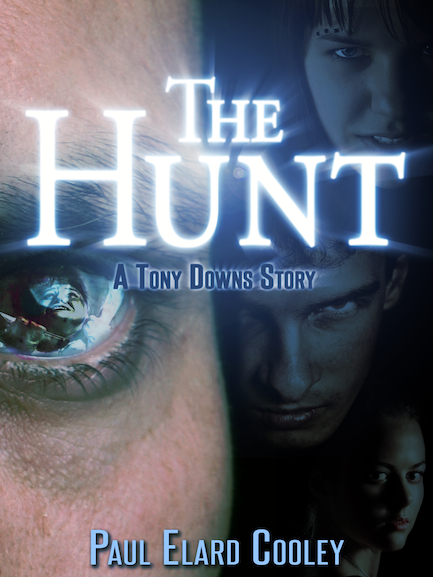 The Hunt, by Paul Elard Cooley

“Tony Downs has a gift enabling him to see into the minds of others. After his sister’s murder, the telepath purses those responsible and finds himself in a fight for his life.” (via the description on Amazon.com)

The first in a series of stories, the cover for The Hunt had to set the look and feel for all subsequent stories. It’s always a challenge to do the first in a series, especially when you know you’re the one that will be doing the following ones. You have to give a lot of thought to the main elements that will have to be repeated, modified, or changed out. Color and text are other factors to consider. While the fonts should remain consistent, color is more flexible. You can decide to keep the color the same, which can be another series identifier, but this can have limitations on the other imagery you use or may require a lot of extra work to get the colors across the series to match, depending on what it’s composed of. I’ve found that keeping certain elements, like font and specific image details (in this case the face close up with the eye), it gives you greater flexibility on color. For the Tony Downs series, I’ve decided to do a different color toning for each story, defined by story elements. For this one it had to be blue. Everything about it screamed blue. If you want an explanation of that, well, you should probably read the story. I generally try to pull out of the setting (time of day, weather, location) for keys to this, but it’s more of a gut feeling than anything else. Not sure how helpful that is, but that’s the best I got.

New technique! I was having some trouble with the text (shocking, I know), so I went Googling. Whenever I get stuck somewhere I start off with a general search, like “photoshop text effect” in this case. After browsing around I came across a YouTube video demonstrating this ghostly light emanation text effect and I knew I’d found the answer to my problem. Bonus: it was pretty easily accomplished using little besides the motion blur filter.

Another interesting element that will be carried across the series is the reflection in the eye. That one took me a bit because my initial attempts kept looking like a reflection in mirrored sunglasses, losing the details of the actual eyeball. Even with the awesome power of blending modes, some images just wouldn’t work for this. I ended up using a different face for the main character as it had everything to do with the high key (bright whites) of the eye of the first guy I used. This actually worked out well as I much prefer the angle of the face of the one I actually used.

The Hunt is the first of this series, but the second is already in the bag and waiting to go live. Watch this space for the next reveal!