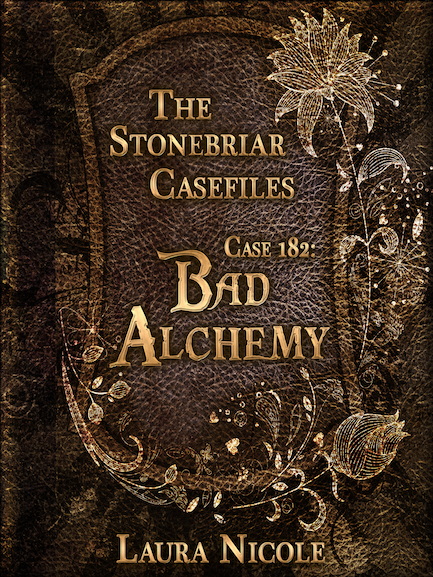 “Crime scene investigation is all about finding the little details. For Investigator Beatrix Stonebriar, little details can be a big deal. After all, she’s a four-inch tall fairy. But now she has to use those details to figure out who is committing a string of murders of magical beings just trying to get by in human society.

Magical creatures have it hard enough in human society without serial killers out to get them. And if magic is involved, Beatrix Stonebriar is on the case. But can this fairy investigator find the murderer before he strikes again?” (via the Flying Island Press store)

I was so super extra pleased with this one. I really think it’s a beautiful cover. I love getting to play around with textures and this was a great chance to do so. Even better, I got to work with the super nice Laura Nicole to develop what I think is one lovely image. I really enjoy compiling fantasy images, in this case one with the look of an old fairytale book. It’s always a treat when a client let’s you run with a crazy idea that’s totally different from what was initially discussed.

Initially I tried to create an image of the main character, a fairy, in front of a lock (lifted from the story), but while the image was fine, I had so much trouble placing text on it that it became so frustrating I started to hate it. That’s not a good sign. I hung on to that creation, as it would make a lovely wallpaper or character study image, but I took a risk and approached Laura with a different idea.

To create this, my first thought was to find a stock photo of a leather bound book and alter it with text. Maybe I’m too picky, but I just couldn’t find one that suited my needs. So I took a different angle. Instead of a picture of a book, why not just make the cover that way? It was sort of a *facepalm* moment, as now it seems obvious.

The base layer is a fill layer with a leather texture. On top of that I pulled out these grungy, vintage-look frames and used blending modes to create the worn border, and an altered, masked duplicate to do the embossed floral parts. The text placement was a little more complicated, since that’s what makes up the majority of this cover. There are no people or objects to work around. While title and author name are always the most important elements of a cover, in cases like these it’s even more so. I spent a good deal of time working on the beveling and texturing and coloring alone, but minute size and position tweaks were far more time consuming. The end result was way worth the effort though. So pretty!

Word has it that this story will become a series, so I’ll be doing color washes to differentiate them when it comes time for that. Go check it out!