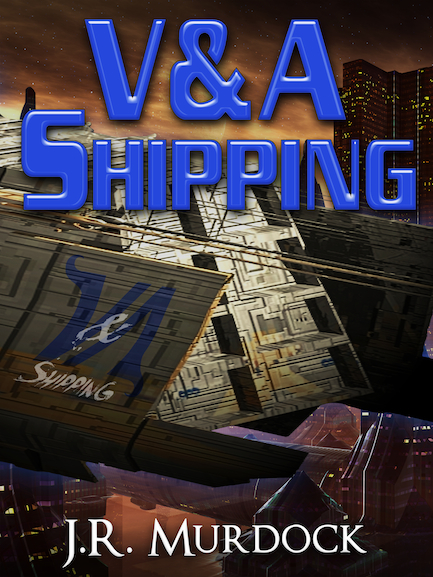 “Vic and Argmon are just trying to make a simple delivery, albeit while being chased by the local fuzz. They pick up an unexpected stowaway on their planet to planet run.

Joey, the unwitting stowaway, is thrust into space and must deal with not only being in space, but with all the alien creatures aboard the SS Acid Rat.

Once the delivery is complete, Vic, Argmon, and their new crewmate Joey, are offered a double or nothing gamble to pick up a second delivey for a celebration party. They must return to Planchar in twenty-four standard hours with a shipment of beer.

It sounds so simple, perhaps too simple.” (via the description at podiobooks.com)

When you have a client as excited about a book cover as Mr. Murdock, it’s hard not to catch a little bit of that excitement yourself! (Seriously. All his emails started with my name IN ALL CAPS with EXCLAMATION POINTS!!! lol)

This cover is a redesign, as Mr. Murdock is preparing to rerelease this title in ebook and print format come February 1. There was nothing overly complex about this one, but I really love the way it ended up looking almost hand-drawn. I was very careful to choose images that 1) met with the descriptions Mr. Murdock provided and 2) blended well together when placed on the cover. It’s always better to find two things that match well then have to do a whole bunch of wrangling in Photoshop later to make them look only sort of the same. A little more effort in one area (in this case, gathering the stock images to use) can save you a TON of time in the final compilation. Since I took the time to do that, the trickiest thing was finding the right fonts for the job. I can’t even begin to tell you how many I went through before finally settling on this one. The only other bit of interest would be the logo on the ship, one Mr. Murdock was kind enough to explain clearly and concisely.

In fact, Mr. Murdock was truly helpful in this design process. He answered every question I had and gave me plenty of room to play with creatively. Really, you can’t ask for much more in a client, so I was very happy when he said he’ll be coming to me for more covers later on this year.