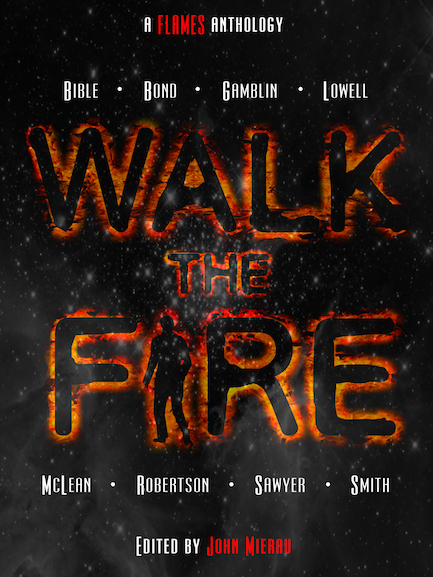 Walk the Fire, a Flames anthology edited by John Mierau

Any who step through may stride across the world, and beyond. A precious, precious few, the Ferrymen, can guide you true through any flame and emerge from a crossing as young and strong as when first the flame kissed them.

Now: fleets travel space for lifetimes, reach new worlds, challenge the black between galaxies, all thanks to the Ferrymen.

Step through the flames and discover for yourself.

WALK THE FIRE. The universe awaits. May the ferrymen take you!” (via John Mierau)

This was a super sekrit project I’ve been keeping under wraps until Mr. Mierau was ready to announce it to the world. When he contacted me with details on this grand plan of his, I was pretty impressed. He’s launching an all new universe that has all the makings of something really, really awesome. To kick things off, he’s enlisted some pretty fantastic writers for a short story anthology which will debut next week sometime. These writers are sure to bring their A-game, so I highly encourage you to go and check it out!

For the cover, John wanted to go high-impact with little or no photorealistic images. Black and white will always have the greatest impact due to the high contrast, so that was where I went first. It needed more, however, to punch it up a notch as well as incorporating some sort of symbolism for flames.

So what to do?

Let’s set some words on fire!

This was accomplished primarily with blending modes and layer styles. While the effect doesn’t replicate individual licks of flame, it was intended to look more like what you might see within the flames themselves.

As an additional element, I substituted the ‘i’ in Fire with the outline of a man walking, to represent the Ferrymen that guide people from world to world.

All of these elements are set on a field of stars, as the flames are used to travel to other worlds scattered throughout the universe.

It’s simple, but striking. I really hope this anthology does well and that my cover does justice to the contents.