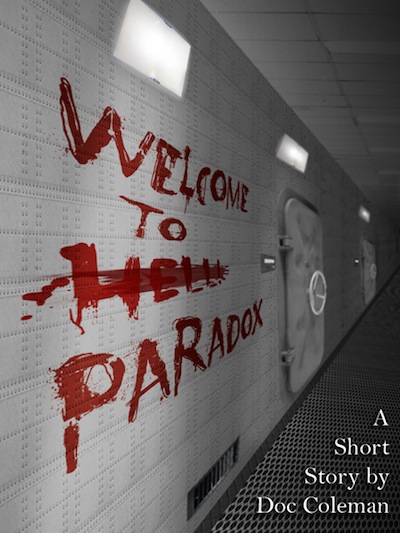 WELCOME TO PARADOX, by Doc Coleman

“Lars Keller is history. Literally. Sentenced for temporal crimes he has not yet committed and exiled to the past with no technology and no way to get back home, Lars soon finds himself caught in an endless cycle of paradox. Unless he can find a way to restore the timeline, Keller will find himself being expelled from space and time over and over again. The catch? If he’s going to restore the timeline, he has to do it from the outside.” (via the description on Smashwords)

I adore concepts that challenge my skills. This particular image was an exercise in perspective. I think it’s probably the most difficult thing for any artist to get right. Even the slightest difference in perspective between image elements can throw off a design, though the audience may not be able to tell what it is that’s wrong. So it was with this cover. I started off with a sample photo that showed the kind of perspective I wanted, then built an entirely new hallway using the photo as a guide. After the hall was built, it was a matter of adding other elements and typography, plus the lighting effects. I get more and more use out of layer blending modes than I EVER thought possible. If you use Photoshop and don’t take advantage of that feature, you are missing out!

This image was rendered entirely in Adobe Photoshop CS4.