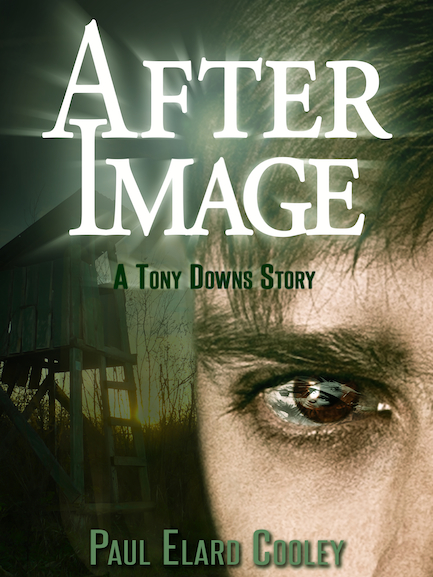 After Image, by Paul Elard Cooley

“What happens when the hunters become the hunted? A year after his sister’s murder, Tony Downs joins his father for a winter deer-hunting trip. The ghosts of his father’s past turn the experience into a dangerous nightmare. A beloved character from the Parsec Nominated stories “Tattoo” and “Closet Treats,” “After Image” is the second story focused on Tony Downs.” (via the description on Smashwords)

Both the first and second Tony Downs stories were commissioned at the same time, but this was actually the first one I had an immediate idea for. Again, as with The Hunt, the setting defined the color cast of this cover. The outdoor setting and plot points of the story couldn’t really be anything but green. It didn’t fully come together until I’d put together The Hunt, however, as that one defined how the rest of the series would look (the face, the text, the eyeball reflection).

The most difficult part of this was finding a suitable image for the eye reflection. The plot has memories of Vietnam in it, so I needed something to represent that. I tried a few different things, a group of helicopters, enemy soldiers creeping through the brush, but when I blended them into the eye they became unrecognizable. Ultimately, I tried the image of the G.I. and it worked perfectly and really spoke to the plot better anyway. Much thanks to Shannon Hinners, who has become my one-stop resource for military-related photographs (this would be the second time she’s assisted me).

I also used a different person for the facial closeup this time. It was a challenge to find someone that looked enough like the first cover that no one would really know the difference (this model had a different eye color, but Photoshop fixed that easily). There wasn’t really a need for this, but using the same elements over and over can get to old and they lose some of their shiny. It seemed like the thing to do at the time, but probably not necessary.

I’m not sure how many of these Mr. Cooley has planned, but I’m pretty sure there are more coming. Good thing, as I really like this text effect a lot and look forward to using it a few more times!