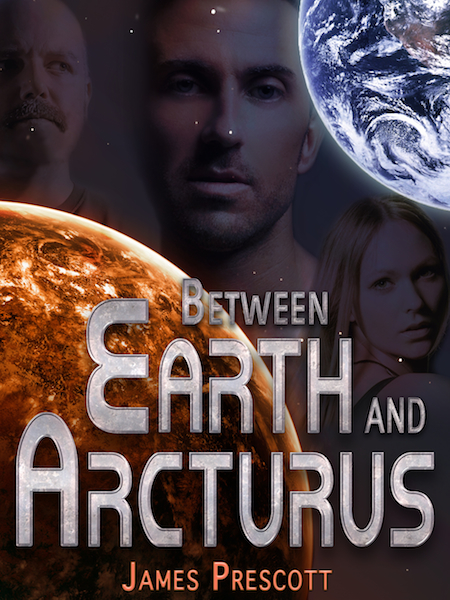 Between Earth and Arcturus by James Prescott

“Between Earth and Arcturus is a 28th century adventure following Commander José Aguire of the Exploration Corps, and Lynda Stokes, an heiress who has a bad temper and superhuman strength, as their Captain’s mind slowly becomes unhinged.

The Earth government has been taken over by a ruthless, evil power, and the Captain conspires to start a rebellion. The one thing nobody counted on was running into an alien civilization, which becomes a game-changer, and further pushes the captain’s sanity towards the brink.

The alien king needs contact with Earth, but the political opposition in the alien government will stop at nothing to ruin his plans and take control. Commander Aguire and Lynda Stokes are the last hope for both the aliens and the suffering people of Earth.” (from the page at Amazon.com)

Taking a cue from the design for The Grey Moon, Mr. Prescott requested a cover with the same sort of feel. This one harkens to Science Fiction imagery in the same vein as Star Trek books and others in the space adventure genre.

It took a while to round up the right models for this one, as it’s always a challenge to meet the client’s vision of their characters with stock images. It would be wonderful to have a selection of models at my disposal and a photographer to capture them, but, alas, I work within limited confines so I do the best I can.

There was some discussion with this client regarding the author name, and I think it merits further conversation. The concern was that, in using a male pen name (instead of an ambiguous first initial with the last name), it might cause female readers to steer clear of the book simply because it was obviously written by a man.

Now, allow me to get up on my soap box for a moment. I’ll try not to be too preachy with this.

For centuries, women have been reading male authors, mostly because that is what was available. Even female writers use male pen names in order to avoid the stigma that comes with the territory, that being the assumption that their stories will somehow be tainted by… uh, estrogen? I’m not sure. There seems to be a fear that the science will be less science-y, or it will somehow devolve into nothing more than a bunch of feels thinly veiled by a flimsy plot, I guess. It’s a very real and very prevalent reaction in the genre fiction world overall, not just in Sci-Fi.

Honestly, I don’t think I know any women that disregard a book simply because it was written by a man. Unfortunately, I can’t say the reverse of that, but I think (hope) that is gradually changing.

When I design my covers, I always have Maureen Johnson’s inspired cover-flip challenge on my mind. There is a definite trend to make female authors’ books more “feminine” looking, and that surely needs to change. However, I also have to keep my clients’ needs in consideration: the biggest one being that the cover has to sell the book. Due to trends in traditional publishing, I often find my hands tied by what’s been established as reader expectations for certain types of books as far as cover imagery goes. Also, clients may request certain things from me, and, as they’re kind of my boss in this capacity, if they don’t approve my creation, I don’t get paid.

But Mr. Prescott’s concern did leave me thinking. Do women steer clear of a book if it’s written by a man? Personally, I don’t harbor that prejudice, but I wonder if others do.

What are your thoughts?