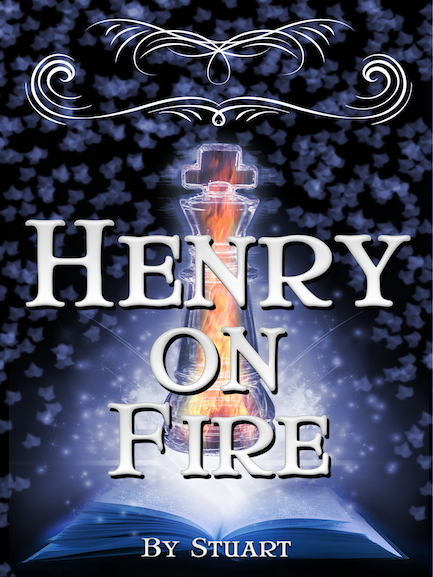 Henry on Fire, by Stuart

“Middle school can be full of pitfalls; bullies, gym class… girls. For Henry, the King of Dweebs, life in suburban Virginia is boredom with a side of awkward.

That is, until the night a horse with a strange scar arrives in his front yard.

This mysterious creature takes him to the land of Altara. Here, a dangerous conspiracy threatens the rise to power of their boy leader. Henry realizes he is being played like a pawn but he must learn to think like a king if he is to warn the other boy and set things right.

As he braves the perils of Altara at night and navigates through the tribulations of suburbia during the day, Henry will learn about, friendship, responsibility, and how to live as HENRY ON FIRE.” (more info on the book & author on Stuart’s site)

Henry on Fire is a Middle Grade book, and, as such, was another first for me. Non-adult books require a different perspective, I think. In order to design for kids, you sort of have to know what appeals to kids. It helps to have children of this age, which I do, but by no means is that required.

So what makes a kid pick up a book? Here’s my thoughts on it. I’m sure there are more folks out there more well-versed on the subject than I, but I’m giving it a shot anyway.

Kids want to see uncomplicated images. That’s not to say they can’t be detailed, but it should be obvious what is there. This cover is just that. Chess piece. Book. Magical glowing stuff. These three elements hint at the contents of the story. Henry plays chess. Henry writes a journal. The world has magic. Now, you won’t really know those things unless you read the back blurb and the story, but that’s neither here nor there. The cover isn’t meant to give every detail of the plot, just little teasing hints at what’s between the pages.

Contrast and color. This particular cover isn’t overly colorful, but pops with contrast. The orange of the fire in the chess piece against the blue hues provides one type of contrast (orange and blue are complimentary, meaning opposite on the color wheel, in case you forgot your elementary school art classes), and the black and white provides eye-catching clarity. People generally see overall contrast first and foremost, so this is a very important element.

Kids don’t have as much experience reading genre cues from covers, so your image needs to speak to them plainly. This cover follows the current design trends in MG Fiction, so it will be a comfortable thing to see and pick up. Note the lack of sharp corners in the title font. Children probably won’t consciously note it, but this was intentionally done to give it a friendlier feel. It’s a rather hugable font, don’t you think? With the words in white and slightly embossed, it kind of looks like marshmallows. If that’s not kid-friendly I don’t know what is! LOL

The element I’m most proud of in this image is probably the chess piece. I spent a good deal of time blending various layers of fire in varying contrasts to get the exact inner glow I wanted, and the chess piece itself was a combination of brush stroke filters, contrast boosting, image inversion, wind filters, blurring, and, of course, blending modes. I want to say the chess piece alone ended up being something like seven or eight layers. The effect was well worth the extra work though.

This cover also required a print version, but there was some work to be done in regards to the back text. I took the synopsis and the author’s 500 word blurb and condensed it down into what you see at the beginning of this post. I have been doing this as part of the cover design, but I’m considering offering it as a separate service or as part of the design package. Writing blurbs for others is considerably easier than writing my own, and I think any author will tell you that it’s one of the most excruciating parts of the novel creation process.

Here’s the print version. Look for this one in October 2012. 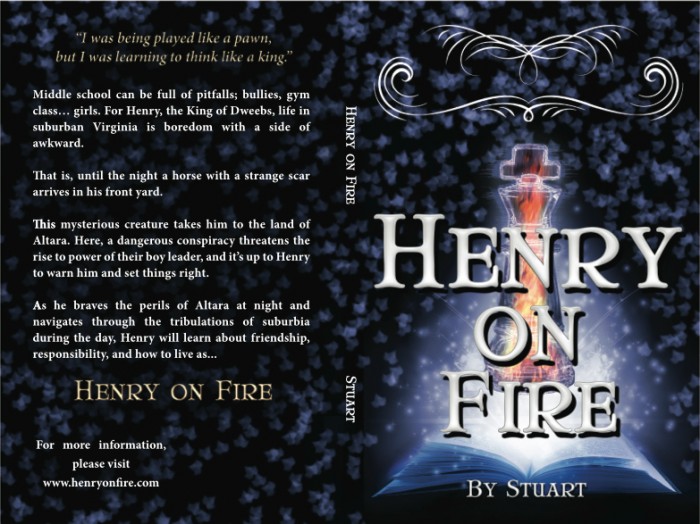