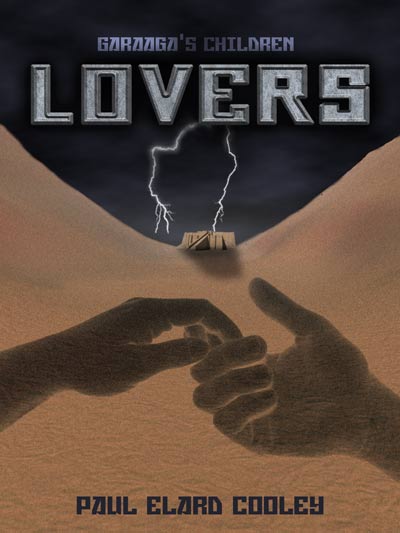 “In ancient Babylon, the nephilim Drimesh has lived a brutal, if ethical, life. Once pursued by the Tribe of Abraham, Drimesh has taken refuge in the great city. Living off his wealthy matrons has provided him a comfortable existence.

When he meets a Priestess of the Goddess Ishtar, his life becomes a struggle between his human desires and those of the beast that lives inside him. Will he succumb to the beast and suffer his mother’s fate, or find a way to balance the duality?

Lovers, the second volume in the Garaaga’s Children series, is steeped in the history of Hammurabi’s Babylon and the beginning of Judaism. Mixing elements of ancient history, dark fantasy and erotica, Lovers is sure to leave readers wanting more.” (via the product page at Amazon.com)

My initial concept for this novella cover was to do a Mesopotamian version of the Lovers tarot card. I whittled away at the idea until I reduced it to the image you see here: two people reaching out for one another (or letting go, perhaps) over the backdrop of massive sand dunes, while the foreboding ziggurat looms at a distance.

The landscape was rendered using TerraRay (which I cannot praise enough!), with additional imaging done in Adobe Photoshop CS4. Mr. Cooley has decided to move forward with this series and is looking to me for a future cover. His various cultural and historic settings are always a challenge, but one I am greatly looking forward to!