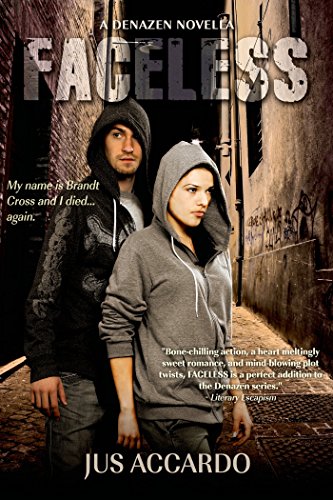 Get the formula. Save the day. Don’t fall for the hot spy. Piece of cake.

About the Book
My name is Brandt Cross, and I died. Again…
I’m living in the body of a Six named Douglass Cain, a certifiable scumbag whose ability is on Zendean Industries—AKA Denazen’s—most wanted list. There’s some serious bad going down, and Ginger, the leader of the Underground, sent me undercover to obtain information because people are dying.
My cousin, Dez, is dying…Denazen thought they’d found a cure for the Supremacy decline, but they were wrong. That’s the bad news.
The good news? Franklin Wentz. Wentz, the owner of a genetic research company, is brilliant and just a little bit crazy. He’s unwittingly created a formula that may cure the sick Supremacy kids, and everyone wants it—including Devin, the super hot Resident.
Get the formula. Save the day. Don’t fall for the hot spy. Piece of cake.
Look Inside
Disclosure of Material Connection: Some of the links in the page above are "affiliate links." This means if you click on the link and purchase the item, I will receive an affiliate commission. I am disclosing this in accordance with the Federal Trade Commission's 16 CFR, Part 255: "Guides Concerning the Use of Endorsements and Testimonials in Advertising."