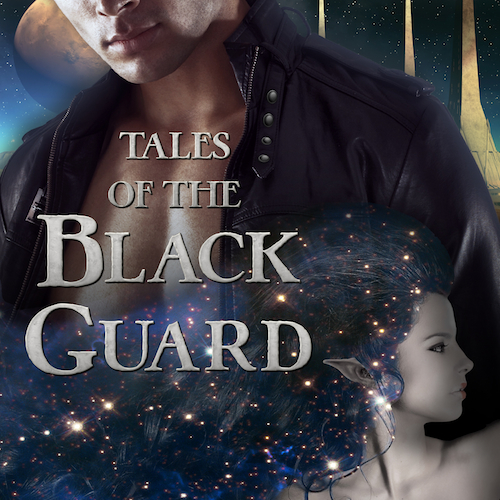 “Nobilis Reed is now accepting submissions for an audio (and possibly ebook) anthology titled “Tales of the Black Guard.”

I think it’s a very nice looking image and I’m totally in love with this woman’s hair. Who can make this look a reality instead of a Photoshop composite image? I want to wear the universe in my hair too!

As to the cover itself, lots of blending modes and masking going on here. The woman is a composite image of two photos plus a third for the stars in her hair, with lots of tweaking for skin coloring based on the character description. The biggest thing used here is the blending modes, which basically means the setting for which one layer is blended with the layer below it. This adjusts settings like opacity, color, and which shades and tones show over whatever is below it. It’s a concept that’s easier to show than explain, so I may put up a blog post about the basics of this in the future. Once you know that feature is there, you wonder how you ever lived without it. Seriously. It’s that awesome and completely non-destructive to the image (which means it can be changed without doing anything permanent to the image it effects).

Maybe that’s more info than you wanted, but there it is. Yay for learning stuff!