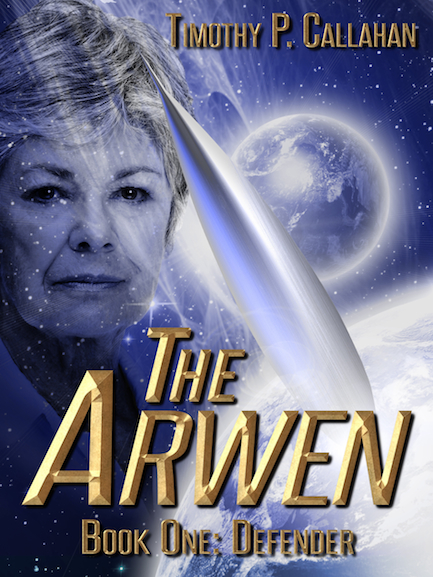 The Arwen, Book One: Defender, by Timothy P. Callahan

“The Arwen, Book One: Defender combines Regal, Ulliam and Armada into one easy to read novel. The first novella, Arwen season one is free and complete with the sample. Purchasing the book will allow you to read the other two seasons of the Gyssyc Trilogy.

The Arwen, Season One: Regal
When a comet the size of a small moon threatens the remote world of Regal the Earth Alliance assigns the most decorated ship in the fleet, the Arwen, to destroy it. Its Captain, Marjorie Cook, sees this as an opportunity to redeem herself after a tragic mistake in her past causes the death of over 400 of her crew. It seems like an easy mission but, when the Arwen arrives, it finds things are not what they seem.

The Arwen, Season Two: Ulliam
The Gyssyc ship is in orbit above Ulliam; the Taskforce sent to meet them has been destroyed. Captain Cook fears the worst; the Gyssyc has declared war on the Ulliam. The crew of the Arwen must figure out what happened before a second fleet arrives, the fate of three races rests in their hands.

The Arwen, Season Three: Armada
The Earth Alliance prepares itself for a new war. Two old enemies have allied themselves with Regal, the planet the Arwen saved two years earlier, to build a massive Armada assigned to destroy Earth. Vice Admiral Payton Cook must defend the planet against insurmountable odds while Captain Cook does battle to save Ulliam from a deadly surprise attack.” (via the description on Smashwords)

The basis for this design was taken from the Star Trek novels that inspired the author starting from a young age.

When it comes to Science Fiction covers, the most difficult element to match correctly is ALWAYS the tech. The reason for this is that I have to rely (mostly) on pre-existing 3D renders, as photographs of imaginary space ships are difficult to come by. As such, it’s hit or miss on how realistic they will look. They range from spectacularly rendered realism to things that look like lego pieces. The ship featured on this cover originally contained four booster rockets on the back end, and a texture that had more of a hand-drawn look than the highly reflective surface described in this story. The first thing I had to do was erase the boosters and get rid of the shadows cast on the body of the ship. The texture was a little more difficult, as I had to find a brushed steel texture, add in a soft embossing to the layer style, apply a blending mode, then duplicate it twice. I added in some lens flares for extra shine on the ship and below to show engine burn. It took some time to find the right font for this cover, but for once that was an easier task.

This cover is already live on Smashwords, and the Podiobooks artwork will be updated soon as well. There may be a print version down the road some time as well.

Any Trekkies want to weigh in on this one? How’d I do? ;)