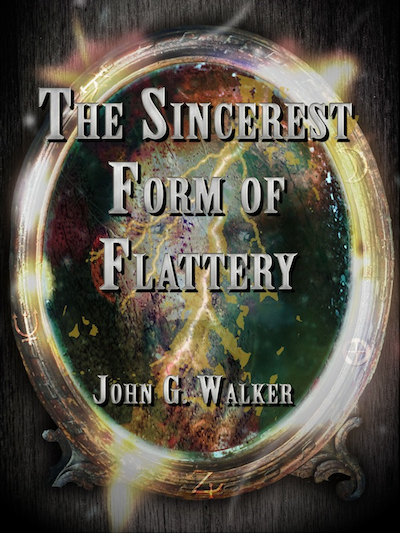 The Sincerest Form of Flattery, by John G. Walker

“Life was simple for private detective Tom Statford. Sure, being the Keeper, the first, last and only line of defense between gods and mortals could make for interesting times, but a mundane existence in southeastern Virginia kept things on the boring side of life. Boring, until bodies appear with all the trademarks of ritualistic homicide. Now, the sole Keeper must not only stop a psychopath, but also the end of the world.

Easy enough, if the killer doesn’t find him first.” (via the description on Smashwords)

There are some covers that I immediately get ideas for. This is not one of those covers. I struggled with this one mightily. I tried three different concepts before I got one to stick. It took many emails with the author and a lot of collaboration between us. Mr. Walker was a pleasure to work with and incredibly helpful in the process. I am extremely happy he likes the finished product so well!

The initial idea for this cover was actually based on something he suggested. I tweaked it and whittled it down until the very basics remained. We have here a mirror with several images superimposed upon it. The base is a nebula, representing the cosmic implications of what the villain hopes to achieve. Over that, a man’s face, contorted in madness as he works toward his goal, or perhaps this is one of the ill-fated victims. Lastly, a lightning bolt splitting the reflection, a commonly recognized symbol of the god Zeus’s power. If you look carefully, you can see several symbols around the frame of the mirror. This is to hint at the plot of the book. Walker’s antagonist has a very sinister purpose, and this is reflected in what you see on the cover.

There was much use of blending modes and brightness/contrast adjustment in putting this one together. The feel of it is grungy and dark, much like the contents of the story. This novel is the first in a series, so you may be seeing more of these in the future.

This cover was created in Adobe Photoshop CS4.