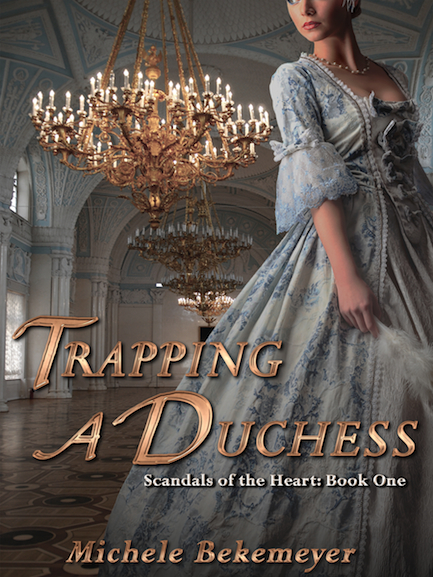 Trapping a Duchess, by Michele Bekemeyer

“Sophie Sinclair is no stranger to scandal. She’s spent the better part of a decade restoring her reputation after jilting a young marquess. But with acceptance comes expectation, and Sophie’s return has society and her family pressuring her to choose a husband. Just when she thought matters couldn’t get any worse, the marquess returns to London, only now he’s a powerful duke with a mind for marriage and a taste for torment.

The Duke of Tolland wants nothing more than an amiable and unassuming bride. He believes he’s found his future duchess in pretty newcomer Lady Abigail. There’s only one problem: Sophie has returned to London and caught the eye of Lady Abigail’s brother. His future threatened by his past, Andrew doles out an ultimatum. When Sophie rises to the challenge, the stakes soar to shocking heights.

With neither willing to concede, there’s only one way to tip the scales: Seduction.” (via Burning Book Press)

I’ve been sitting on this one literally for months. Since April or March I think.

Michele is a highly talented author. I say this with all confidence as I am a person who gets a bit stabby if made to read a romance novel, and yet, I completely fell in love with this book when I first heard the podiobook version. The snarky banter coupled with the lovely prose enchanted me and the smutty parts were critical to the story, rather than a distraction from it. What’s not to love?

So you can imagine my excitement when Michele approached me about a redesign. The Scandals of the Heart series was relaunching with an all-new publisher and she felt it was time for a new look to go with it. Since starting the book cover design business I’d been itching to get my hands on a romance novel, if for no other reason than I wanted to expand my genre reach in as many directions as possible. Also, depite my aversion to the words beneath (usually), the covers are generally just pretty things. The bird in me loves all the pretty things.

Another great thing about romance novels is that they’re fairly straight forward in their design. This one is an historical romance, so of course I needed to find imagery suited to the period within the story. I assembled a collection of appropriately styled ladies and let Michele choose the one she thought best represented the main character.

And then came the “headless woman” debate.

If you don’t know what the “headless woman” debate is, please see Gail Carriger’s blog post here or Philippa Ballantine’s rant here. Basically, it’s in regards to the trend at cutting off the featured woman’s (or man’s in some cases) head for the cover image. The supposed reasoning for doing this was to make a reader feel more comfortable in placing themselves in said character’s shoes. There are various points and counterpoints to this argument, but I’m not here to weigh in on the subject. I default to what my client wants if I don’t feel it’s detrimental to the cover. In this case I didn’t feel it was. And so, off with her head.

The woman and the scenery were entirely separate elements, so I adjusted the lighting between them to match up and added a transparent gradient to darken the bottom. This added a touch more realism to the setup, as well as did other additional shadows. The text probably took as long as all of the rest of it put together. RomNov’s have a tendency towards swirling, looping scripted fonts, but I hesitate to use those as they don’t translate well at thumbnail sizes. The one I eventually settled on is one of my favorite go-to fonts, Datura, I believe. It’s amazing how well-suited it is to such a variety of images and genres. The subtitle is in a plainer font, though I don’t remember off the top of my head what that is.

All in all, I have to say this cover was a joy to create. The client was a breeze to work with (friendship notwithstanding as it’s no guarantee you can work with friends professionally too) and the image came together beautifully. Michele was so pleased with my work, she hired me for the cover for book 2 straight off (which isn’t live yet, but soon!), and hopefully will let me get my hands on book 3 as well!

You can learn more about Michele Bekemeyer and her writings here.