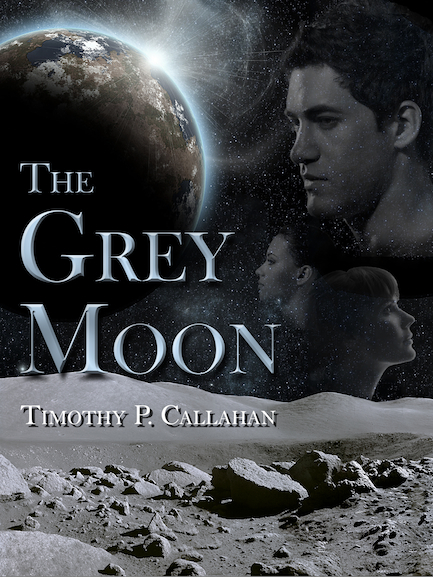 “Hello, my name is Alex Johnson, AJ to my friends, and this is a story on how I ruined my life and my marriage. Liz and I thought we’d have the perfect life on the moon, her working as a computer programmer, me working as a teleoperator. We were wrong, so very wrong. Living in a world where all you do is work then go home can be boring to a guy like me. Add to that a wife who will stop at nothing to get ahead and another woman who wants to be more than friends and you have an explosive mix that blew up in my face. But, I’m getting ahead of myself. Listen to my story, see what happened, and don’t hate me when it’s over.” (via the description on Smashwords)

How do you combine two genres into one cover? Well, this is one way to do it. Firstly, I tried to limit the color palette. Given the title, using muted tones really made the most sense. Secondly, even though this is partially science fiction, I stayed away from using a lot of tech in this one. Yes, it takes place on the moon, and yes, they live in the future, but as this story also feels like literary fiction, it was important to keep the focus on what was important about the story: the characters.

If you look at the other cover I did for Mr. Callahan, you’ll note that I gave a similar treatment to the people featured on this cover. I wanted this to give potential readers who like the author’s other work a reason not to shy away from this tale, even though the subject matter is a little different. These two are dissimilar enough so as not to be considered in the same series, but they certainly won’t look bad when displayed side by side.

I kept the fonts straightforward so as not to distract from the image, and this moonscape is actually a NASA photograph from the first moon landing. I had to give it a hint of color toning (if you look carefully you can see it’s not a true grayscale image, but has a slight yellow cast) to blend it with the other images used here. True grayscale looks unnatural as the human eye doesn’t typically see it outside of printed words and images. So if you ever find yourself having to do something similar for a cover, keep that in mind.

I think the simplicity of this image is pretty effective. A little goes a long way with book covers. It’s all about balance and this one fell into place rather nicely.

This cover was featured on indieebookcovers.com for January 2013’s cover contest! It’s such an honor to be seen amongst other pretty covers and even be nominated for such a thing! The judge’s comments were just lovely:

“The Gray Moon is intriguing with the eclipsed light and the moonscape. The darkness and light, the blues and grays, and the people required a multi-layered composite. The use of three is echoed over and over, which is amazing. Not an easy cover to design, and it’s been done with precision choreography. It has a retro sci-fi feel in a modern setting. It’s full of contrasts, but it’s subtle.”

While I didn’t win (and I’m totally fine with that btw), those comments really make me feel great about my work here. Thanks to whoever tipped off that blogger who chose this cover to compete!